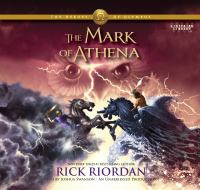 The Mark of Athena

The Heroes of Olympus Series, Book 3

Annabeth is terrified. Just when she's about to be reunited with Percy--after six months of being apart, thanks to Hera--it looks like Camp Jupiter is preparing for war. As Annabeth and her friends Jason, Piper, and Leo fly in on the Argo II, she can't blame the Roman demigods for thinking the ship is a Greek weapon. With its steaming bronze dragon figurehead, Leo's fantastical creation doesn't appear friendly. Annabeth hopes that the sight of their praetor Jason on deck will reassure the Romans that the visitors from Camp Half-Blood are coming in peace.And that's only one of her worries. In her pocket, Annabeth carries a gift from her mother that came with an unnerving command: Follow the Mark of Athena. Avenge me. Annabeth already feels weighed down by the prophecy that will send seven demigods on a quest to find--and close--the Doors of Death. What more does Athena want from her?Annabeth's biggest fear, though, is that Percy might have changed....
Publisher: [S.l.] : Random House, 2012
Edition: Unabridged
ISBN: 9780449014530
Characteristics: 1 sound file : digital digital audio file
Additional Contributors: Swanson, Joshua
cloudLibrary

The Argo 2 is about to land at Camp Jupiter. Nervous and afraid of making a mistake and ruining relations between the two camps, the Greeks on the ship feel a foreboding feeling, described as a “chill down their necks.” Annabeth wishes she could pray to her mother, Athena, but when the gods have made much less contact with their children and Athena disowned her in a dream, doing so would likely not be helpful. Just when all seems well after Percy and Annabeth’s reunion and the talks with the heads of Camp Jupiter are smooth, The Argo 2 fires upon Camp Jupiter. Now the enemy of Camp Jupiter, the seven chosen demigods must resolve the conflict unfolding before them and prove their innocence. To do that, however, Annabeth must fulfill her own part of the prophecy and pass Athena’s test. I like that Annabeth played a larger role in this book than normal. This book showed how a child of Athena like her faces challenges that can be solved with the gifts she receives from Athena. Ages 12+

I recommend that you read the two books before this one, but honestly this books just gets to me. So good, really recommend if you like Mythology books.

In the Mark of Athena we see the seven demigods of the prophecy come together and begin their voyage to the Ancient Lands in order to defeat Gaea and find the doors of death. I personally really enjoyed reading from the view of Annabeth as this book features her big quest in order to retrieve the Athena Parthenos and mend the rivalry between Greeks and Romans. The twist at the end is also extremely suspenseful. This was one of my favorite books of the series.

Rick Riordan is AMAZING. For over a year, all i've read are books by him. I TOTALLY recommend him!!!

I like that Annabeth just casually mentions that Jason and Percy could have done great killing each other. Vote: Tempest or Blackjack?

If I could give this book 10 stars, I would. I have read a lot of books and this one is my absolute FAVORITE. I highly recommend the series and especially this book.

To add a comment to this book is really to add a comment about this series. My opinion about this series is that it’s a good one to follow the Percy Jackson books. Riordan did a good job with this series, which I think topped his first. I liked how thick this book was. Checking out a book from a library just to finish it the same day is satisfying, but a little annoying. I’m a big reader and enjoyed the humor and drama this book holds. Go Team Leo!

This book is great, I am a billionaire. Cody Ko

This book is amazing! I remember when I finished the book and read the ending cliffhanger. I was like "give me the next book now!" wait... sorry I started reading the next one immediately XD. This book is a good one, trust me.

blue_bird_1563 thinks this title is suitable for 10 years and over

violet_fox_1337 thinks this title is suitable for 8 years and over

Caleaha thinks this title is suitable for 11 years and over

blue_fish_1549 thinks this title is suitable for 10 years and over

black_pony_62 thinks this title is suitable for 10 years and over

"On the bright side, "Percy said. "Both Jason and I outrank you, Octavian.So we can both tell you to shut up."

"I can do anything I want." Chrysaor said. "My warriors have been trained to perfection. They are vicious, cutthroat-"
"Dolphins," Percy noted.
Chrysaor shrugged. "Yes. So?"

"Incredible," Jason said."These are REALLY good brownies."
"That's your only comment?" Piper demanded.
He looked surprised. "What? I heard the story. Fish-centaurs. Merpeople. Letter of intro to the Tiber River god. Got it. But these brownies-"
"I know," Frank said, his mouth full. "Try them with Esther's peach preserves."
"That," Hazel said, "is INCREDIBLY disgusting."
"Pass me the jar, man," Jason said.
Hazel and Piper exchanged a look of total exasperation. Boys.

I’m sure both of you would be great at killing each other. -Annabeth Chase to Jason Grace and Percy Jackson

All around the Romans, charolsten bay erupted like a San Francisco fount ion putting on a show. The Romans washed out to the sea. Percy stood on the deck, holding Annabeth's dagger.
"You dropped this."

Frank advert end his eyes as if the sight of them together might burn him.
"Every one thinks you've been kidnapped," he said. "We've been scouring the ship. When Coach Hedge finds out--oh, gods, you've been here all night?"
"Frank!" Annabeth's ears were as red as strawberries. "We just came down here to talk. We fell asleep, accidentally. That's it."
"Kissed a couple of times." Percy said.
Annabeth glared at him. " Not helping!"
"Uh, were supposed to meet for breakfast. Would you mind explaining what you did--I mean, didn't do? I mean...I really don't want that faun--I mean satyr-- to kill me."
Frank ran.

"As long as we're together."

"That is exactly how people beat Chinese handcuffs. They turn into iguanas." -Leo

The Heroes Of Olympus The Mark Of Athena By Rick Riordan is about closing the doors of death in order to save the demigod's camps camp half blood and camp Jupiter ,both a place for demigods. they are opposite counterparts of each other. one is the Roman way and the other way Greek. They must stop Earth mother Gaea's forces from entering into the human world. but seven demigods must work together. but there are only six. who is the seventh one? the prophecy will still remain a mystery

Greek and roman demigods are sent on a mission to stop Gaea from waking up. Two different myths combined together

These demigods are sent on a quest to stop Gea's awakening and save this statues. Romans and Greek Demigods must team up!!!

After their perilous adventures, Annabeth, Jason, Leo, and Piper arive to the Roman camp. After they reunite with Percy, the prophecy of 7 have been exiled by some magic causing a slip up of Leo. They now go on, yes, another quest to find the Mark of Athena, a symbol of the wisdom goddess that has potential to reunite the camps together. But there is a catch, Annabeth must do this alone, as said by the prophecy. Can Annabeth alone save the camps, split by grief and accusations?

Jason, Annabeth, Leo and Piper finally meet Hazel, Frank and Percy. Together, they have to complete the prophecy of 7....this book is absolutely amazing, because of all the greek mythology that you could learn from it, and the fact that all the characters seem so real.

So basically, the go to rome but accidentally blow it up so they leave, then they Meet nemisis and trick narcissus then they go to kansas meet bacchus and jason and percy try to kill each other, then they meet porkey and kate actually phrcys and keto...

There is a little bit of fighting but it comes at apropriate times and the fighting actually makes it more exciting. I love the ending because Annabeth and Percy are going to have to work together except I hate how they leave you hanging at the end.

IGNORE THE PEOPLE WHO TRY TO SUCK YOU INTO THINKING THAT THIS BOOK HAS LOTS OF FIGHTING. .

Violence: Some fights but not too graphic.

Sexual Content: Percy and Annabeth kiss, so do Jason and Piper. Frank, Leo, and Hazel are a sort of romantic triangle.

Frightening or Intense Scenes: I thought for a second' that in the fight scene Percy Jackson might actually lose!!!! Too addicted!!! I really can't wait until The House Of Hades Comes out!!!

Other: awesome will leave you wanting more

Other: arrrggggghhhhhhh this is junk

Other: You may be permanently blinded by the supreme awesomeness of this book